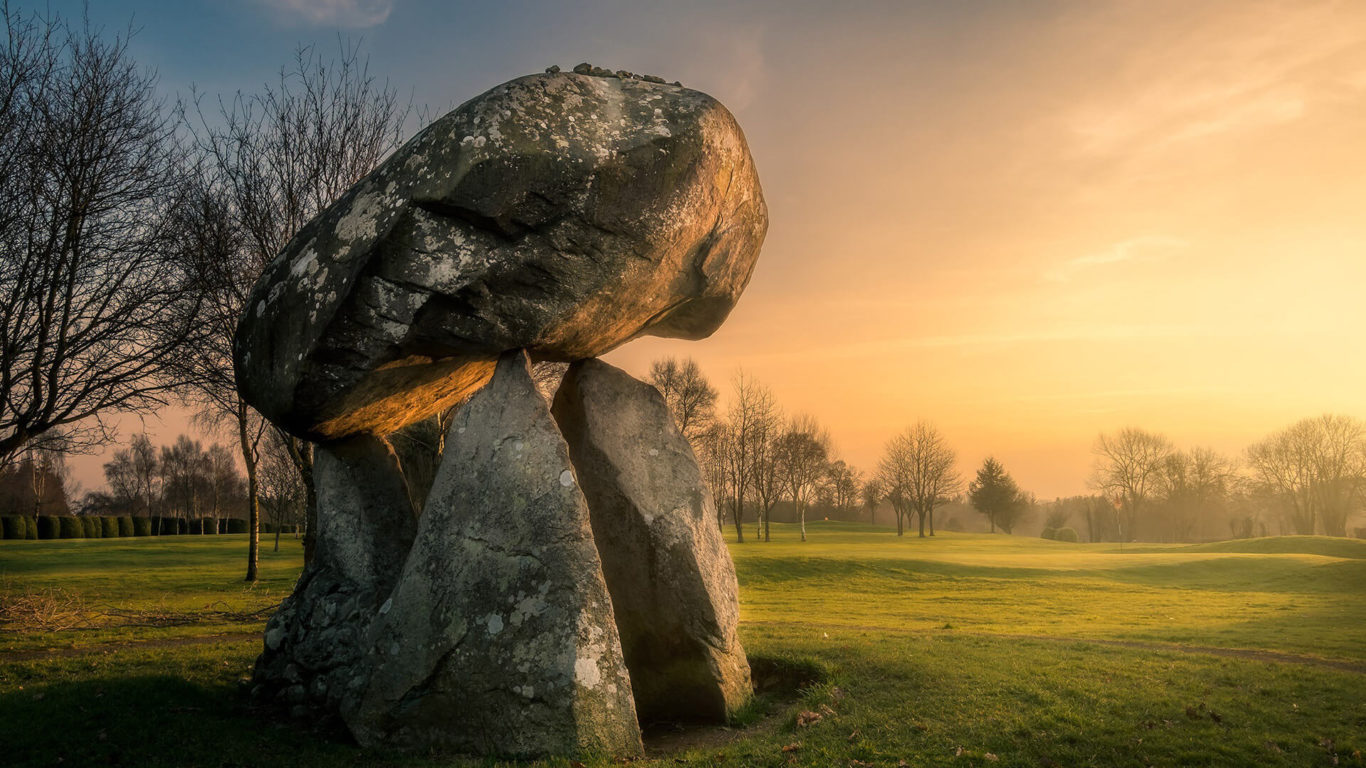 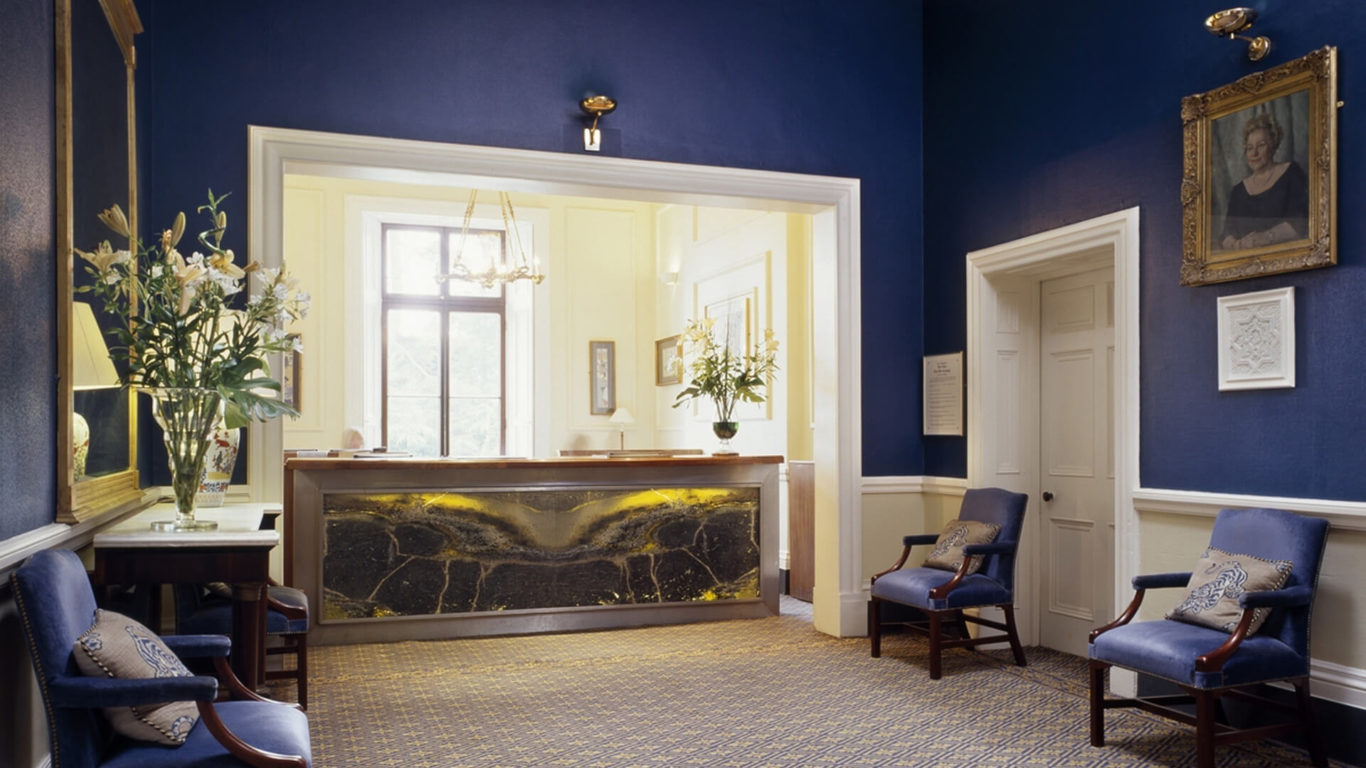 The name Ballymacscanlon — literally the town of the son of Scanlan — is derived from the ancient sept of Scanlans—rulers of the district of Oriel, County Louth, from the earliest times until the Anglo-Norman period.

That the area around Ballymacscanlon was inhabitated right back into pre-history is evident from the wealth of Archaelogical remains in the district. One of the most important of these is the Cromlech known as the “Giant’s Load” which is said to have been erected by a Giant called Porrah Buagh Mac Shaggan. Less romantically but possibly with more accuracy science regards the Cromlech as marking the site of a Bronze Age burial dating approximately from 4000 B.C. Science does not explain, however, as tradition tries to show how the enormous top stone weighing over 46 -tons, was raised upon its three supports.

The “Giant’s Load” is now more generally known as the Proleek Stone and it is said that a wish is granted to all those who can throw a pebble so that it lands and stays on top.

Close to the Cromlech is the entrance to a cave which runs under the rath or mound called Cill Ca Lara and which is regarded as the tomb of a Scanlan chieftain of the 10th century.

Apart from the Archaelogical remains, however, there is very little record of the history of Ballymacscanlon until the coming of the Normans. We know that Saint Brigid, second Patron Saint of Ireland, was born near Faughart in the year 453, and there is also a reference to a remarkable chieftain named MacScanlan, who, in 833, was prominent in repelling a Danish intrusion into the area.

Recorded History in the full sense of the terms begins with the coming of the Normans when the district of Ballymacscanlon passed out of the hands of its ancient overlords and was annexed be Hugh De Lady to the Anglo-Norman pale. In 1185 De Lacy granted Ballymacscanlon to the Cistercian Abbey of Mellifont in whose possession it remained until the dissolution of the Monasteries by King Henry VIII in the 16th Century.

From then onwards Ballymacscanlon and the surrounding district played an important role in the history of Ireland and has numerous connections with Ireland’s struggle for freedom. The cemetery of the old Church on Faughart Hill near Ballymacscanlon is claimed to be the last resting place of Edward Bruce, King of Ireland, brother of Robert “The Bruce,” the hero of Bannockburn. After the battle of Bannockburn in 1314 King Robert was invited by the Irish to come across and drive the English from this country as he had so successfully done in Scotland. Robert himself was unable to come but he sent his brother, Edward, who defeated the English in a battle near Slane, and was proclaimed King of Ireland. Edward’s success was short-lived, however, and he was finally killed in battle near Faughart in October, 1318.

When during the reign of Henry VIII the Monasteries were dissolved, the lordship of Ballymacscanlon passed from the hands of the Cistercians and was granted by the Crown of England to Sir Edward Moore, ancestor of the Marquis of Drogheda. It was to remain in the hands of the Moore family until the middle of the 18th century. Sir Garrett Moore, who inherited the title in 1600, was a staunch friend of Hugh O’Neill, the Great Earl of Tyrone. Although O’Neill and his fellow-Earl, Hugh O’Donnell of Tir Conaill, were fighting what proved to be a losing battle against the crown forces, the friendship of Sir Garrett and the Irish Chieftains remained strong, and O’Neill was a frequent visitor to Mellifont and Ballymacscanlon.

After the ill-fated Battle of Kinsale and the Treaty of Mellifont, O’Neill and O’Donnell left the country for ever in the historic Flight of the Earls. Before their departure O’Neill visited Mellifont to say farewell to his trusted friend. Tradition has it that Moore was unaware of O’Neill’s impending departure and was surprised when the Irish Chieftain went to each member of the Moore family in turn and blessed them showing much emotion. O’Neill then left for Rome where he died a broken man.

Although the Moores retained their connection with Ballymacscanlon until the 18th century other names appear respecting the titles to the lordship including those of Sir A. St. Ledger in 1590. James Hamilton, Viscount Clandeboy 1608, and the McNeills, and early member of which died there in 1696.

Ballymacscanlon is not without its military associations. During the Williamite Wars of the 17th century the Duke of Schomberg’s Anglo-Dutch army encamped in the domain before the Battle of the Boyne. At Ballymacscanlon, too, they set up a field hospital from which the sick and wounded were sent back to Carlingford after the battle en route home for England. More recently it is recorded that when in 1790 the Irish Volunteers, inspired by the French Revolution, raised the Banner of Liberty the Ballymacscanlon Rangers were commanded by Robert MacNeale of Ballymacscanlon, father of James Wolfe MacNeale.

During the early 18th century the Ballymacscanlon Spa – an iron or chalybeate spring located about a mile north of Ballymacscanlon village – was well known for its curative properties. Tradition has it that amongst more than a thousand people who came in 1720 seeking cures, was an old gentleman who was said to have been completely restored to health after having been bedridden for over 10 years. By the middle of the 18th century, however, the spa seems to have been completely unknown.

It was about this time that the Moores ceased their long association with Ballymacscanlon and their place was taken by the Fortescues and later by the Fosters. The present building was erected during the first half of the last century by Sir Fredrick Foster and later enlarged. Through the marriage of Louise Jane Foster to Thomas, second Baron Plunkett, Ballymacscanlon House became the home of the County Louth branch of the Plunkett family and they lived there for more than 50 years. The Bas-relief which crowns the main entrance is the crest from the Plunkett coat of Arms – “The White Horse Passant,” linked with their family motto: “FESTINA LENTE” – Make Haste Slowly…

The resort is owned by Mr. Thomas Röggla and along with his team at the hotel, every effort is made to provide genuine hospitality in this new phase in the evolution of this magnificent location. Thus, the indelible mark made by the Quinn family over the past 75 years will continue to be appreciated by future generations.